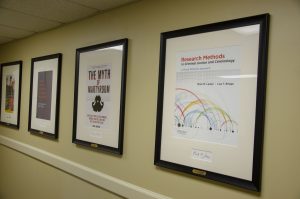 Subfields in Criminology and Criminal Justice include:

The page provides brief overviews of our faculty members’ research interests in these areas. For more detailed information, including lists of publications, browse our directory.

This subfield focuses on the role the judiciary plays in meting out justice, how prisons and jails function, and the interactions between offenders and the justice system.

Dr. Stephen Clipper’s research interests focus on the pretrial stage of the criminal justice system specifically focusing on risk of failure to appear, the efficacy of release programs, and understanding the effects of policy changes. His other research interests include applications of forecasting and risk assessment in criminal justice decision-making, machine learning, and quantitative analysis.

Dr. Matthew Dolliver’s research program includes studying juror’s perceptions of crime and justice, particularly with regards to race. His studies more closely examine the impact of race and gender on the bail process.

Cyber crimes are crimes where a computer has been used in the commission of a crime or as the target.  Transnational crimes are not just international, but are crimes that by their nature involve cross-border transference as an essential part of the criminal activity.

Dr. Yi Ting Chua’s research centers around the role of the Internet in criminal offending and is shaped primarily by the increasing role of technology and cyberspace in criminal and deviant behaviors. Her current work spans across three research areas: (1) individuals’ pathway into cybercrime; (2) impact of social networks and structures on the evolution of subcultural values, beliefs, and behaviors; and (3) countermeasures against cybercrime.

Dr. Adam Ghazi-Tehrani’s cyber-related research focuses on nation-states, how they interact online, and “cyber war.”  He also studies white-collar crime, with a focus on Asia and state-sanctioned crimes.  His current projects also include work on Hate Crime.

Dr. Brittany Gilmer’s research examines the political geographies of maritime crime and criminal justice responses. She has conducted ethnographic work on Somali piracy and IUU fishing off the coast of East Africa and served as a transnational crime expert consultant for the UNODC and FAO Somali Fisheries Sector. Her two current research projects explore: 1) the experiences of Somali piracy hostages and 2) prosecutorial decision-making in Somali piracy trials in East Africa.

This subfield covers policing, mass violence, and terrorism (the unlawful use of force against persons or property to intimidate or coerce a government or the civilian population to further political or social objectives).

Dr. Adam Lankford researches many types of social deviance and criminal behavior, including mass murder, mass shootings, and terrorism. In recent years, his research has examined perpetrators’ psychological tendencies, mental health problems, suicidal motives, fame-seeking tactics, copycat behavior, and weapons acquisition–along with the strategies that might be used to prevent their attacks.

Dr. Daisy Muibu’s research work is international in scope and draws from the literatures of political science and public policy. Her research examines relationships between conflict, counterinsurgency/counterterrorism, and policing. Specifically, there are two interrelated streams to Dr. Muibu’s research agenda. The first explores police legitimacy and local (formal and informal) police responses to terrorist and insurgent group activities. The second stream examines the role of foreign fighters within local insurgent/terrorist groups.

Underserved communities include members of minority populations or individuals who have experienced health disparities, such as BIPOC populations, refugees, and individuals with limited English proficiency.

Dr. Susan Dewey’s research revolves around violence as a social problem: how socio-structural forces inform and create violence, how individuals cultivate resilience after violent experiences, and how institutions respond to violence. The guiding principles for teaching, community-based collaboration, and research throughout her career have been to understand and improve the socio-legal systems and intersectional forces that inform violence and criminal justice system involvement.

Dr. Matthew Dolliver’s research interests focus on the role of gender identity in the measurement and conceptualization of the gender-crime relationship. He examines the role gender plays in how the public forms perceptions of crime and justice.

Dr. Brittany Gilmer’s research explores the intersection of maritime crime, international development, and inequality in the Global South. Her current work examines and critiques the growth and expansion of criminal justice institutions in East Africa as a result of international-led efforts to combat piracy and violent extremism. She is particularly interested in the local impacts of these institutions as they converge with per-existing and traditional approaches to crime and justice.

Dr. Timothy Dickinson’s work focuses on exploring how various elements influence the decisions, actions, and identities of persons involved in criminal activity. His current research examines the forces that shape predatory offenders and illicit drug sellers’ definitions of money and time and, in turn, how these definitions play into their daily lives and crimes