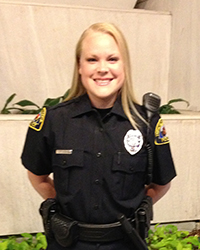 Susan Penrod started at UA in 2007.  By the first semester of her sophomore year, she started to get involved with the Criminal Justice Student Association, working with faculty to set up guest speakers and activities.

By my second year in the department, I was in charge of the CJSA.  While managing CJSA, I was approached by the University of Alabama Police Department to see if there were any volunteer opportunities for students to get to know the officers. From that initial meeting, I was offered a job with the UAPD, keeping up with reports and files in the Criminal Investigations Division.  I worked for UAPD from December 2009 to December 2001 and during that time I made many friends within the department, gained invaluable experience, and made connections that I never would have made otherwise.  I completed my internship during my senior year with the Tuscaloosa County Metro Homicide Unit where I was able to network with officers from all local departments.  Then in December 2013, I stared working as an officer with the Tuscaloosa Police Department.  I strongly believe that if I had not been a part of the CJ Department, CJSA, and worked with the University of Alabama Police Department, I wouldn’t be where I am today.  If there is any advice I can give to other student it would be to get involved.