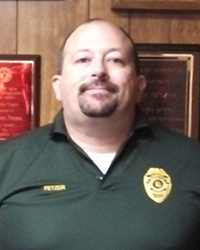 Ken Fetzer enrolled at the University of Alabama as a Criminal Justice major in 1988.  He attributes his success to his active involvement in the Criminal Justice Student Association while studying for his undergraduate degree.

“Through my participation in CJSA, I was one of the first employees of the University of Alabama Escort Service, a rape prevention service on campus. Because of my criminal justice internship with the local juvenile court, I was able to gain employment immediately upon my graduation in 1990 as a probation officer.  I have been employed as a probation officer for the last 23 years. In 1997, I started working on my Master’s degree in the Criminal Justice Department at the University of Alabama as a part-time student.  I was inducted into the Alpha Phi Sigma national honor society in 1998 and completed my graduate degree in 2001.  Currently, I am employed by the Alabama Board of Pardons and Parole as the District Manager for a seven county region headquartered in Tuscaloosa.  Maintaining ties with the Criminal Justice Department has been an important part of my career.”